Plaza Cibeles, one of the most beautiful squares in the world and the symbol of Madrid, owes much of its memorable appearance to the building Palacio de Comunicaciones (map). 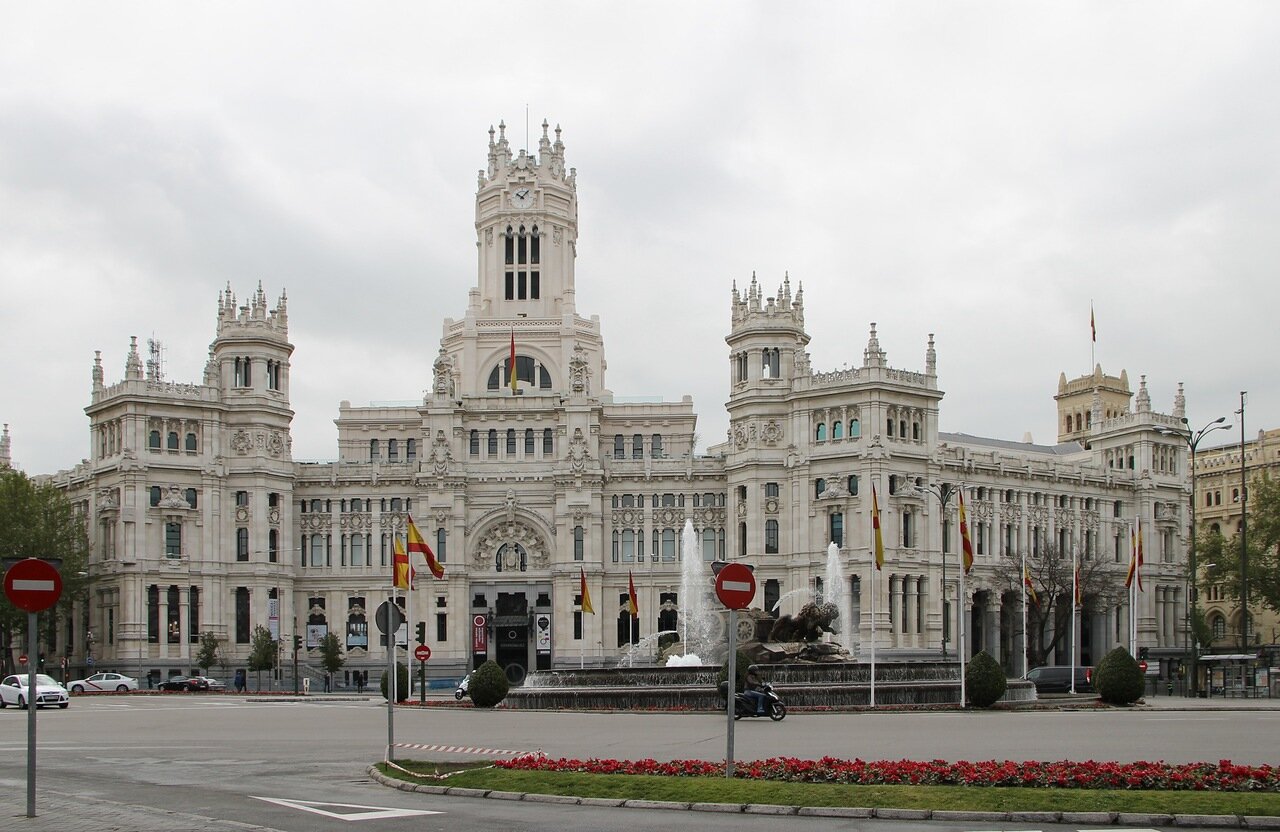 August 19, 1904, the Parliament adopted a decision on the construction of the Central office for postal, telephone and Telegraph service. The winners of the architectural competition young architects Antonio Palacios y Ramil did, Lilian Otamendi Machimbarrena (Antonio Palacios, Joaquín Otamendi) in collaboration with the engineer ángel Chueca (Chueca Angel Sainz), who designed the supporting metal buildings. This was one of the first experiments to create a public building in the art Nouveau style (Spanish Modernismo) in Spain. The project was approved in 1905, and September 12, 1907, construction began, which received the nickname the Nuestra Señora de Las Comunicacion. The construction took 7 thousand cubic meters of stone and brick, about 2 thousand tons of metal. The total area of the premises was more than 30 thousand square meters. The job has been equipped with modern systems of ventilation and heating using low pressure steam. By 1916, the building was ready and began decoration of the facade and interior, in the same year in the building began to work branch savings Bank and mail. The Grand opening of the Palace of Communications took place at noon on March 14, 1919 in the presence of the Royal couple - Alfonso XIII and his wife Victoria Eugenia. Since the beginning of the construction took 12 years and the initial estimate was exceeded three times, but the Palace has become a national pride, architectural masterpiece and a symbol of progress. A year later, the building housed the headquarters of the Universal postal Union. 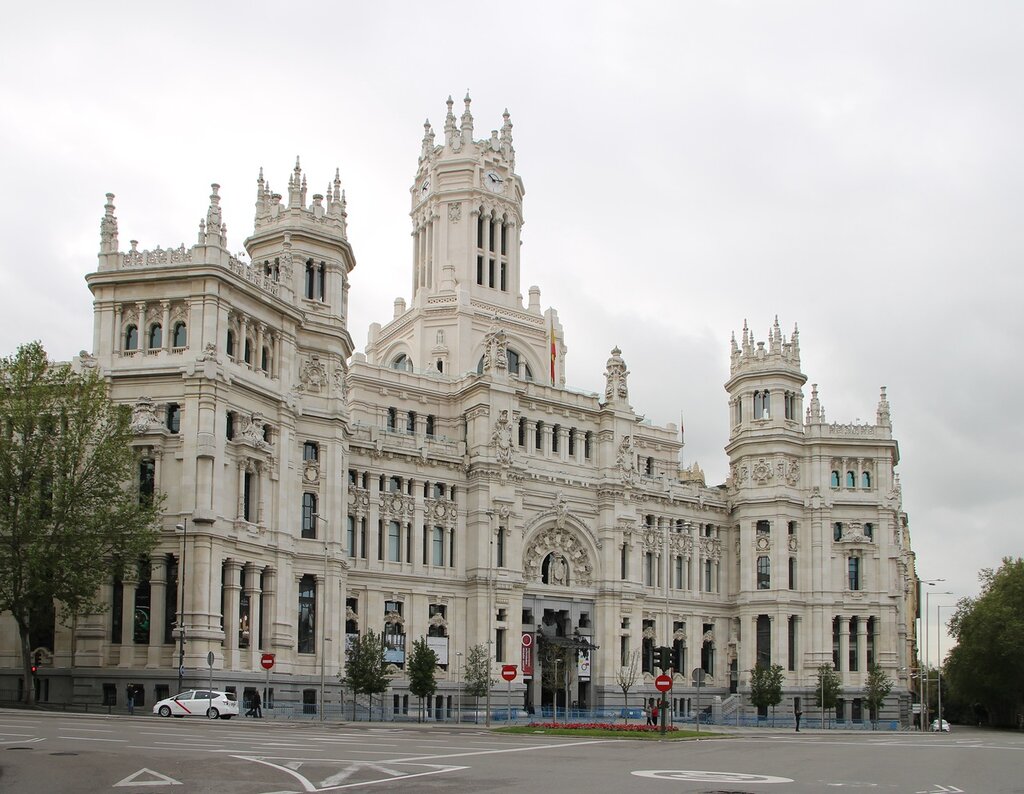 The facade of the building is lined with limestone mined in the Alicante area, which has a pure white color. The design of the facade was performed by a team of artists and craftsmen under the guidance of the sculptor Ángel García. Among them were the famous ceramicists Daniel Zuloaga and Manuel Ramos Rejano. In the decoration of the facade you can see the elements of the Vienna and American architecture of the early twentieth century, which includes Masonic symbolism. The interiors of the building represent a "total work of art" (the authors used the German term "Gesamtkunstwerk"), in which every detail starting with lamps on the tables of operators and ventilation openings is a single artistic complex, while maintaining full functionality. 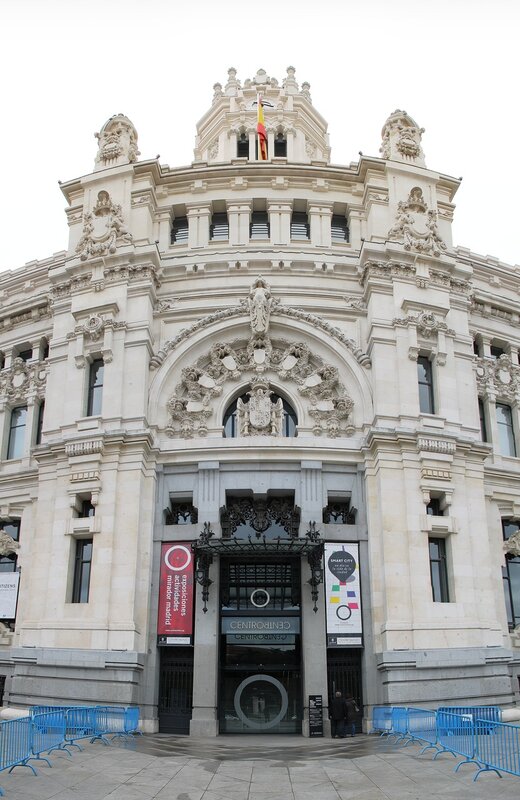 In 1927 the building was expanded, having one façade facing the Avenue de Alcala. On April 14, 1931, the Palace of communications became the first building where the flag of the Second Republic was raised. In the same year, the back of the Palace grew by 2 floors, and the inside was renovated. 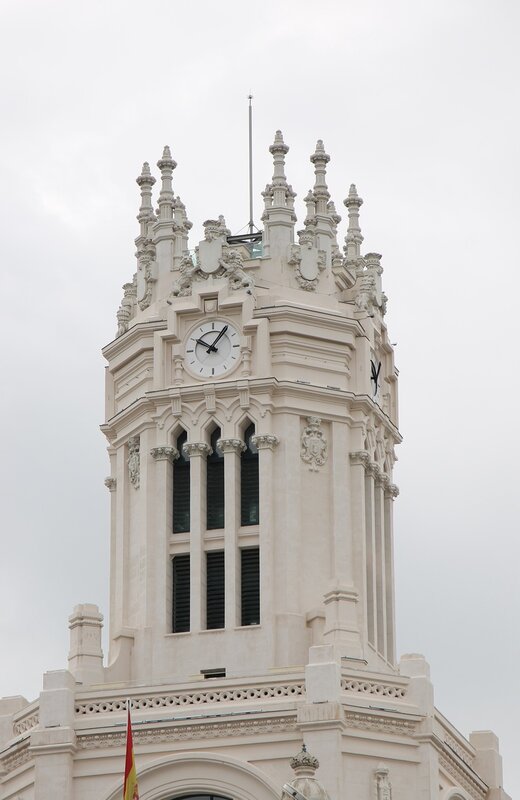 During the Civil war, the building was damaged by air raids, in early March 1939, during the fighting in the city, the Palace received several holes from artillery shells. Potholes from bullets can be seen on the white facade of the building and now. 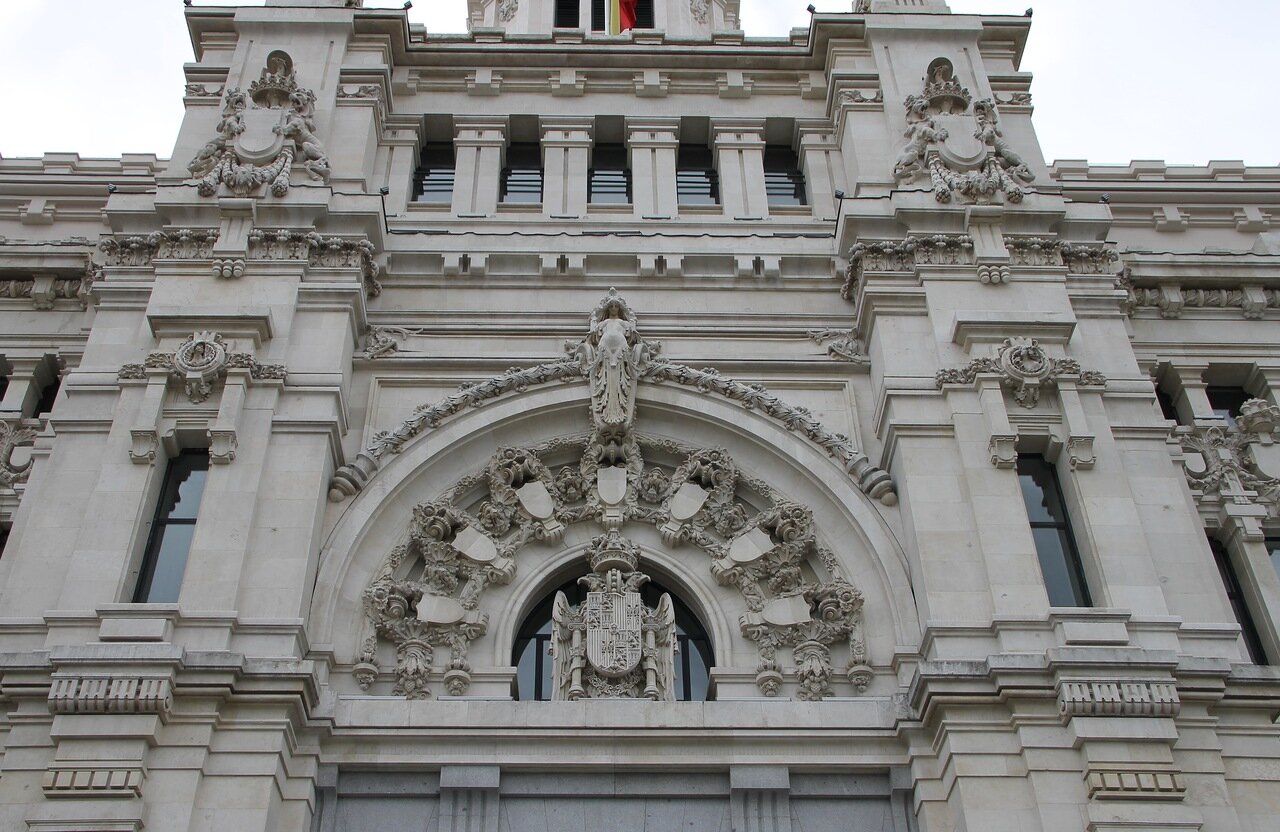 Until 1987, the communications center continued to develop, but with the growth of the city, the national postal service opened more offices. This, as well as the rapid development of the Internet has led to the fact that at the beginning of the new Millennium a huge complex served only about five hundred regular customers. 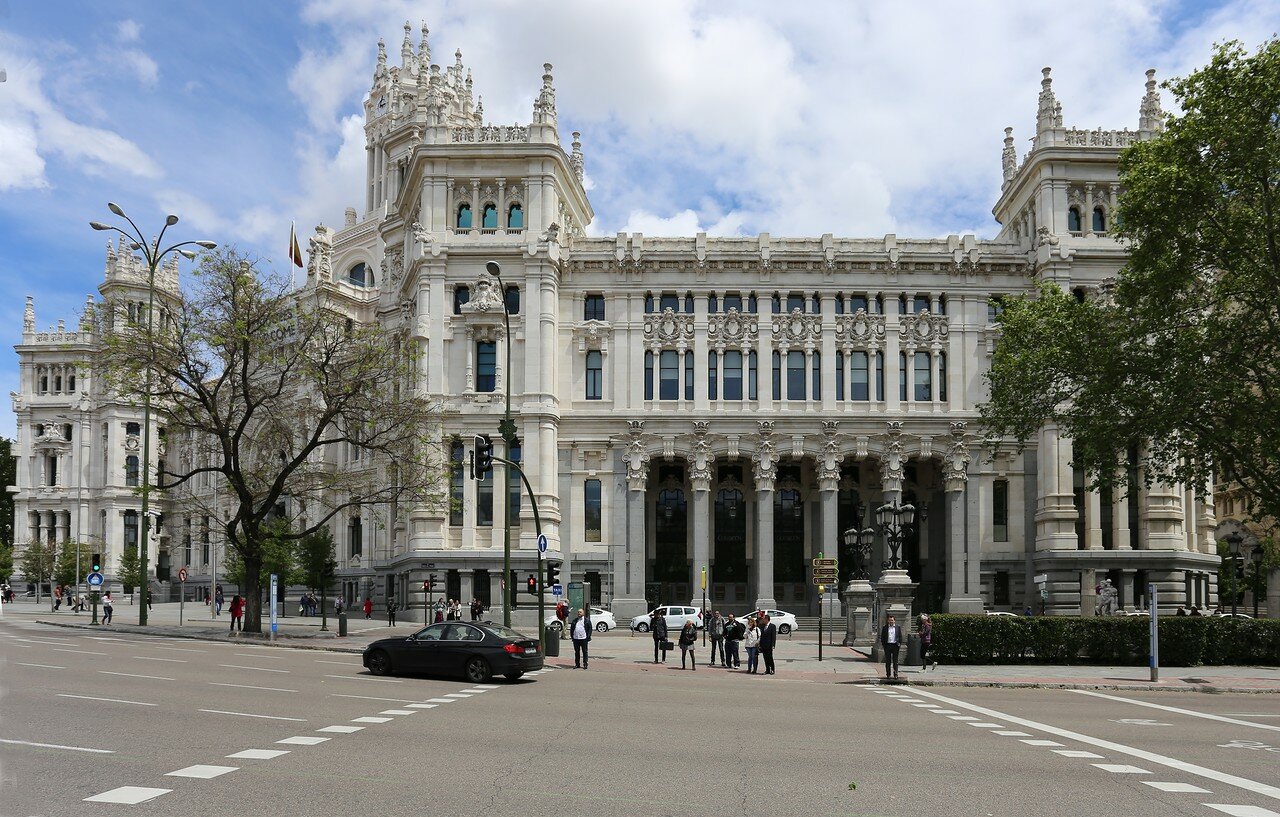 In 2005, part of the premises was given to the services of the city administration, in 2007 the building was completely transferred to the city authorities, becoming the residence of the mayor of Madrid and received a new name-the Palace of Cibeles. 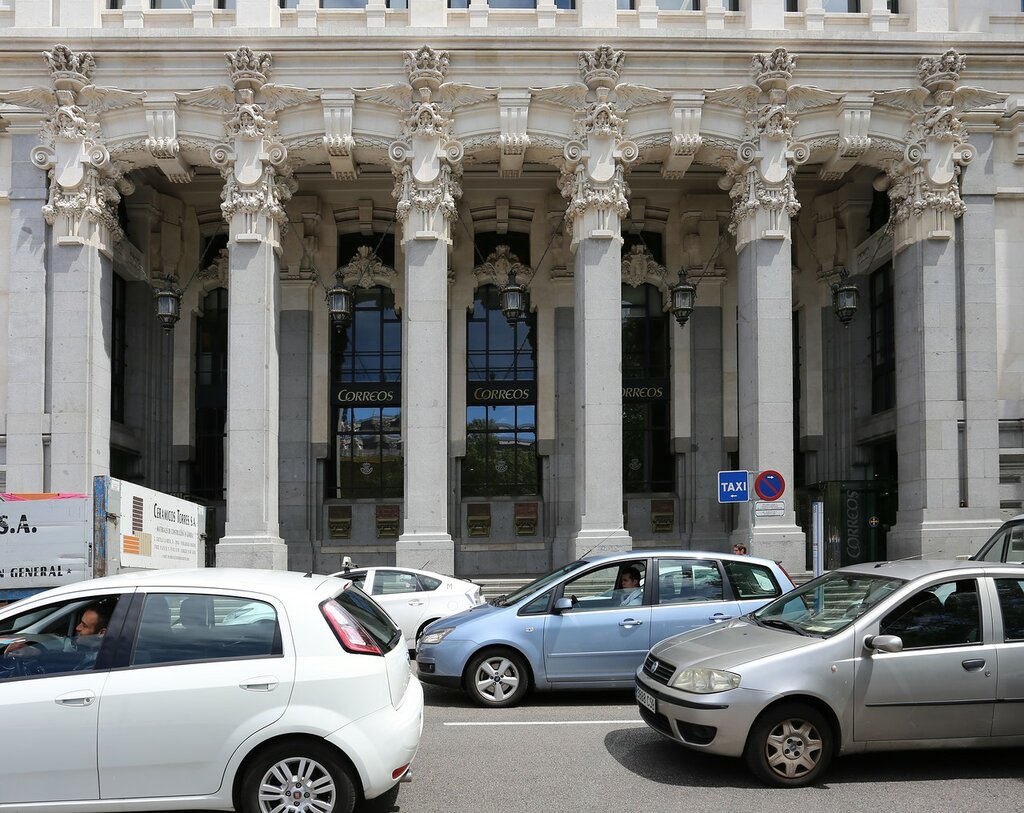 The property has been going through renovation works until 2011, and is now open to the public. Now you can visit the observation deck on the Central tower, however, this is not the best point to view the city, its height is just over 20 meters. In addition, the building has a large area reserved for exhibitions. 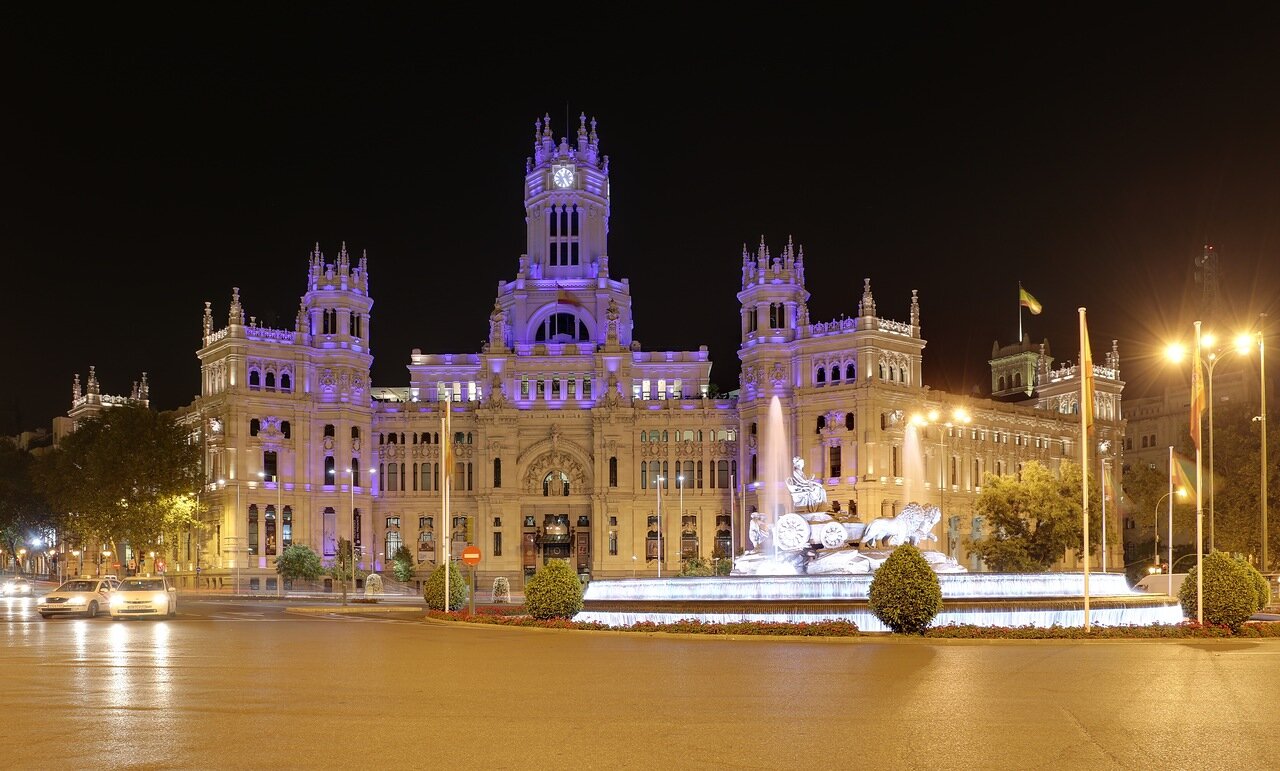